2022 Gallery Ring Crystal Award 2019 Opus Art Supplies, Kelowna, BC EDUCATION I have a Diploma in Business Administration. What followed was a career in Business. In 2012 I committed myself to pursing my interest in the arts. I am predominantly self-taught and seeking opportunities where I may gain technical knowledge. COLLECTIONS Private collections in Canada, United States, Australia & Saudi Arabia DONATIONS Hepatitis C Trust, Art on a Postcard Fundraiser by invitation, London UK Project Literacy Fundraiser, Kelowna BC Art on the Line 2015 Fundraiser, UBCO Visual Arts, Kelowna BC 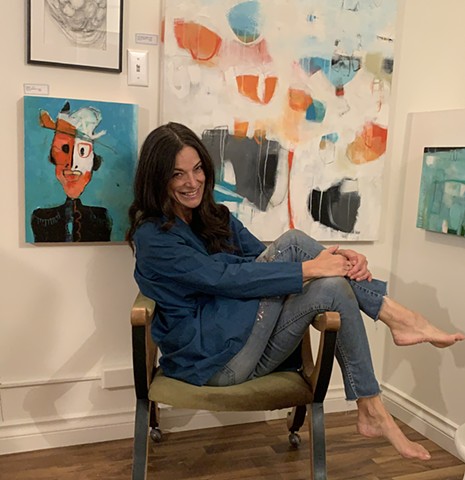 Vikki is an autodidact who left the BFA program at Okanagan College after one semester. She followed a boy into the Business Administration program and graduated with a Diploma in Marketing. She then spent 20+ years in Sales & Marketing, eventually meeting her husband and owning/operating a restaurant and bar. She left her position with a multi-national company to have a second child and found her way back to her love of art in 2012. Vikki has had her work selected for public display by the City of Victoria and has collaborated with Bones Brewery on a beer label. She has a soft spot for strawberry lipgloss and wishes her legs were longer. She believes in faeries and loves gummy bears and those strawberry marshmallow candies when they are just slightly stale.

She has a studio gallery in historic FanTan Alley, downtown Victoria BC and is currently represented by Gallery Merrick in Victoria & ArteFunktional Gallery in Vernon BC.