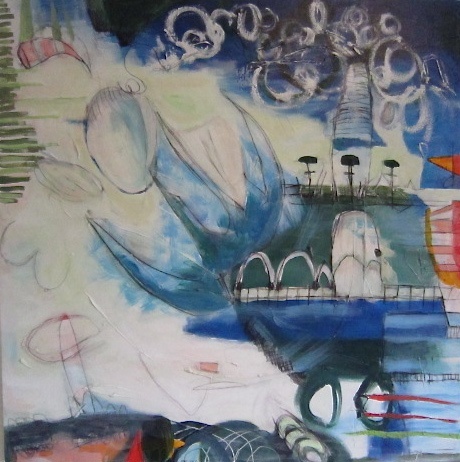 In Spring 2012 I read a trilogy of stories about Josephine Bonaparte. Her childhood in Martinico, as it was called at the time to her marriages and finally her rise and fall, as Empress Bonapart. I was surprised to be so fascinated and absorbed by these compelling stories. The political struggles between the Royalists and the Jacobins, the aristocracy vs. the peasant, the power inherent in the charm and diplomacy of Josephine, the brilliance and willfulness of Napoleon, the greed, war and intrigue during the time of the French revolution and the rise of Napoleon – it held me captive and consumed me whole. I got up early in the morning to read and read late into the night. My family tiptoed around me and these stories dictated my weekend schedule until sadly, I had finished them. The stories lingered and visited me in flashes or feelings. What to do with this haunting state of affairs? I decided to put all of this impression into a few paintings. Since my style is contemporary with only a touch of figurative work, the impression in each paining may be different for the viewer than it is for the painter. As I tackled each blank surface with the subject in mind, I tried to infuse the work with my feelings & impressions while always being careful to keep a little bit of reckless abandon involved so as not to imprison myself, like Empress Josephine.

Josephine did an inordinate amount of travel to meet Napoleone all over Europe while he managed and fought campaigns. At the time, a journey through the mountains from France to Northern Italy was beyond perilous. She reached her Napoleone via royal carriage, which is the central imagery in this painting. Napoleone so worshipped Josephine that I imagine her carriage as a sort of beacon of light and female delicacies to him!